Providing treatment for illnesses and injuries, basic wellness, workers compensation, and preventative health care. Full-service, professional care. When you need to be seen promptly, you're unable to get an appointment with your physician after hours, or you do not have a primary care physician. 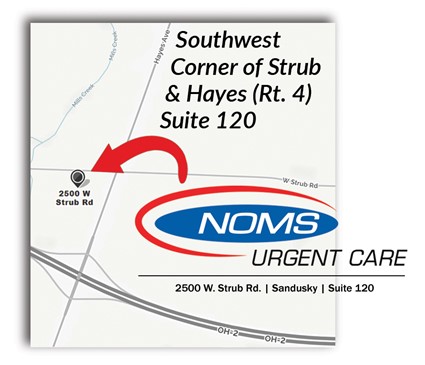 A chronic disease that inflames and narrows your lungs’ airways, making breathing difficult, asthma varies in severity. There different types and each kind had different causes and triggers. Depending on symptoms, medicine use and lung function, asthma is classified by severity levels, ranging from mild to intermediate to severe.

Flu and the common cold have overlapping symptoms and are often confused. Both are respiratory ailments but caused by different viruses. Typically flu symptoms are more severe. People with colds are more likely to primarily have a runny nose or nasal congestion. Colds rarely result in serious health problems, but the flu can become serious. The symptoms of flu typically include fever or chills, cough, sore throat, runny or stuffy nose, muscle or body aches, headaches and fatigue.

An eye infection is caused by an allergy, bacteria or a virus. Symptoms may include redness, irritation, tearing, and itchiness. They may also include a crust at the margins of the lids making it difficult to open the eyes upon waking. Viral or bacterial eye infections are highly contagious.

The medical community considers a fever a body temperature of 100.4 or greater. A fever is a temporary increase in body temperature commonly due to an illness the body has recognized and to which the immune system is responding. Other indicators of a fever may be sweating, chills, muscle soreness, irritability, general malaise, lethargy or weakness, and headache.

Sinusitis is the inflammation of the tissue that lines the sinus cavities, the hollow air spaces that surround the nose. These flare ups can range in people from occasional to chronic.

Skin is the body’s largest organ. Anything that irritates, clogs, or inflames skin can cause symptoms such as rashes, bumps, acne, redness, swelling, burning, or itching. Allergies, irritants, genetics, medication, and certain diseases and immune system problems can cause an irregular skin condition.

The painful, dry, scratchy feeling from a sore throat is typically caused by an infection or an environmental factor. Although uncomfortable, many resolve on their own, but if the condition persists, it may require medication like an antibiotic and medical guidance should be sought.

Sports injuries are bodily damages that occur when engaging in sports or exercise. Sports injuries can occur due to trauma, overtraining, lack of conditioning, and improper form or technique. Failing to warm up increases the risk of sports injuries.

Often confused, sprains and strains are similar but not identical. A joint sprain is the overstretching or tearing of ligaments. Ligaments are the thick, tough bands of tissue that connect two bones together in a joint. The most common location for a sprain is the ankle joint. A joint strain is the overstretching or tearing of muscles or tendons. Tendons are the dense fibrous cords of tissue that connect bones to muscles. The most common locations for a muscle strain are the hamstring muscle and the lower back.

Wounds, burns and infections of such, are damage to the body’s largest organ and first line of defense: the skin. An infected wound or burn is localized trauma to the skin and underlying soft tissue in which organisms have invaded. Infection triggers the body's immune response, causing inflammation and tissue damage, as well compromising the healing process.

What type of provider is appropriate for your situation? Watch for helpful tips.

NOMS Family Medicine is a specialty devoted to comprehensive health care for people of all ages.

NOMS’ internal medicine specialists focus on adult medicine and have had special study and training ...